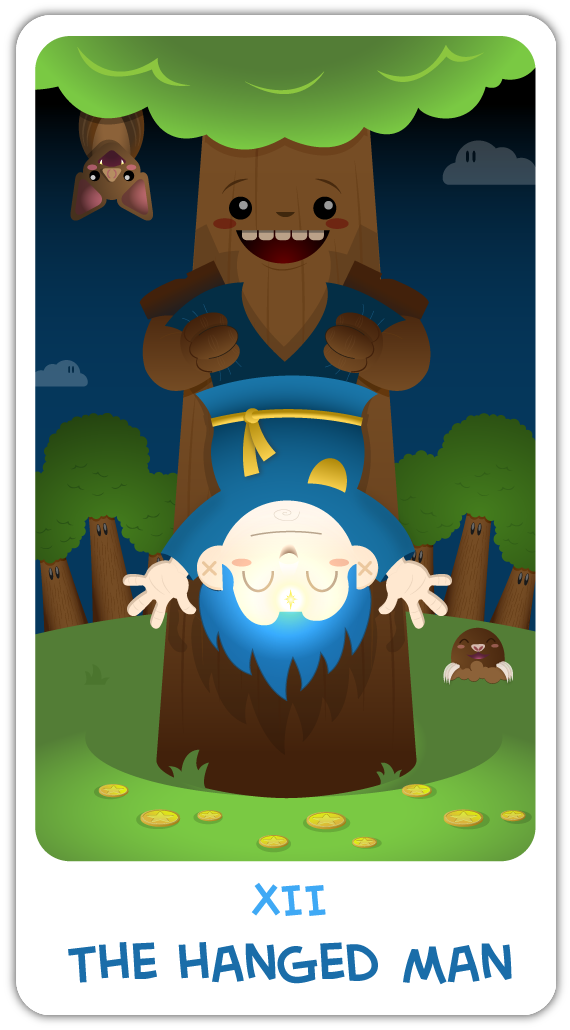 There is to my mind very little ambiguity around the Hanged Man. Without question it is a card of discomfort and disorientation; the man himself is inverted, head where his feet should be, near the earth (listening to its secrets, perhaps, the sounds of moles scratching in the earth and worms sliding through the grime), feet where the head should be, dangling useless, fruitless, unable to ambulate. The man is isolated, trapped by the situation he finds himself in. But his saintly face tells another story, one of enlightenment, an understanding of inversion, peace with his position.

Pamela Smith’s version has the man hanging legs crossed, arms behind his back, red tights, blue jerkin; the pseudo-medieval aspect of the deck maintained in the fanciful nature of his peasant dress. Her writer, Waite, pointed out the living nature of the Tau cross from which he hangs, a trellis rather than a crucifix.

Frieda Harris maintains the crossed legs, but pushes the figure beyond humanity into the world of faceless universality; a meta-martyr, an abstract asexual hanging from a steel ankh pegged to a white sun. Here the Smith-Waite trellis has been transformed into an unrelenting grid behind or beneath the main figure, whose symbolism, like so many of Crowley’s figures, is undoubtedly cryptically specific.

There’s a certain brutal truth to the Harris painting, the kind of truth that Crowley reveled in and taunted traditionals and fundamentalists with. A truth surely tucked away somewhere in Crowley’s twisting, rabbit hole of a guide The Book of Thoth, but one made plain by Joseph Campbell in his Hero With a Thousand Faces: