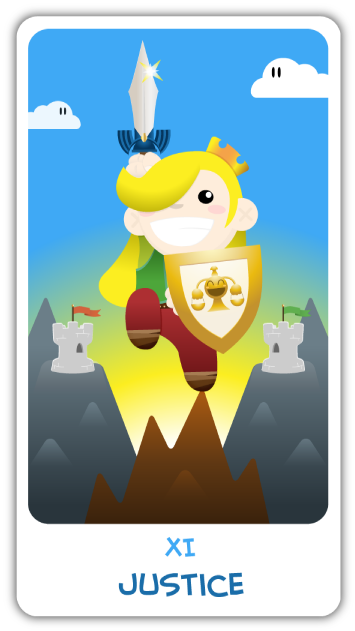 The 11th card, and unsurprisingly the fulcrum on which the major arcana turns (if we discard the Fool, and we rightfully should, since it’s a floating trump, or in some ways the entire tarot) is Justice, and Justice is about balance. There is a strong temptation, I think, both in our culture and in the tarot, to conflate Justice with Judgment. In 78 Degrees of Wisdom Rachel Pollack spends the first paragraph of her description distinguishing between the justice of the courthouse and the justice of the tarot. This need to separate, I think, reflects the shift of our view of the role of the court in our culture, away from the idea of the court as the process of legal clarification and adjustment toward a focus on the court’s role as distributor of retribution and reward. The outcome of legal judgment, its retribution and reward, is important, but it’s only a very small part of the fundamental role that the court, and its symbolic representative the judge, plays in a system of ever-evolving understanding and enforcement, and ignores the broad, sometimes systemic, change that the court can cause.

Because of this cultural shift around the court’s role in our culture, it’s easy to say that the court symbolizes external reparation and redress, while the tarot card Justice symbolizes internal awareness and adjustment, but I think that’s a superficial distinction as, ideally, the court seeks to impart systemic balance on the culture over which it presides through a series of specific, discrete judgments that it hands down. The court and its role, however, should not be confused with its judgments, but instead be seen as seeking redress to the system as a whole through deep understanding of the issues and the system of government in which it exists, and in that way it is truly no different than the way that the tarot card, Justice, functions.

For my card I wanted to infuse the traditional stolid, static Justice with dynamism and life. Pollack tells us that "the psychic laws of Justice, by which we advance according to our ability to understand the past, depend on seeing the truth about ourselves and about life," and while taking steps to acknowledge the truth of imbalance in our lives is, in itself, an action and a powerful level of self-awareness embodied in Justice’s scales, true emotional and psychic health comes not only from that acknowledgment, but also from our adjustment to those new truths. Hence Crowley’s rechristening of card 11 away from Waite-Smith’s incredibly static "Justice" towards a more dynamic element, "Adjustment".

In the same way that Adjustment shakes off the staidness of Justice, it’s also important to note that Justice is not about remaining centered (static), but about becoming centered (dynamic). Falling off of center is the inevitable result of being human, and achieving personal mastery isn’t about remaining centered, which is impossible, but about falling off and returning to center as quickly as possible, hence the many peaks and valleys in this drawing; Justice here has conquered the first peak and is centered for the moment, but the downward slope is coming, and it’s up to her to regain her footing and her balance and begin again. Doing that requires us to use our scales to know when to we’re out of center. Without the scale’s accountability it is impossible to determine when we are out of center, by what degree we are out of center and how to return ourselves to a place of balance once we’ve fallen out.

The lesson of regaining our balance (and the frustration with emulating masters) is summed up nicely in one of my anecdotes about O-Sensei, the founder of Aikido, as told to me by Thorn Coyle. The story goes that a student came to O-Sensei and asked, ‘Master, how is it that you manage remain centered all the time?" and O-Sensei replied, "It is not that I am always centered, it is that when I fall off I return so quickly you never notice." We must learn to use our scales to identify imbalance and seek to rectify it in ourselves. Only when we have learned to address our own imbalance will we be able to see it and rectify it in the world.

It is also interesting to view Justice in context of the second set of 7 cards. She is an integral piece of the three card combination culminating in Temperance. Grace, as embodied in Temperance, cannot be achieved before first acquiring Strength and Balance. Grace requires both in order to exist, and without them grace will not manifest itself.

Secondarily, once we learn how to find our center in Justice, the Hanged Man becomes possible; his inversion is no longer problematic for us. What was once a moment of nauseating vertigo is now simply a situation that we can deal with easily because of the system of balance that we’ve learned in Justice. The Hanged Man without Justice may well be a situation where we are deeply, and frighteningly off center. Seeing the Hanged Man in a negative context may often require a bit of Justice to put the querent more at ease in what is otherwise a difficult and uncomfortable situation.