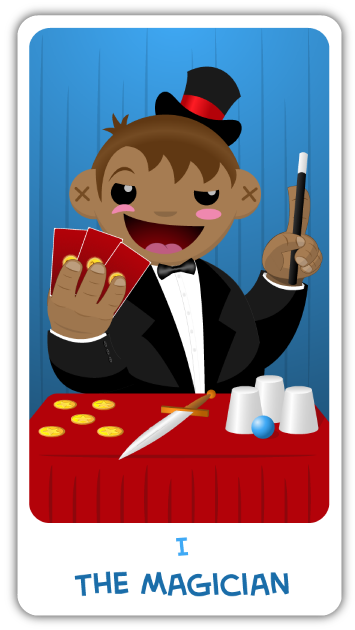 The first true card of the tarot (0 The Fool being a floating trump, belonging not to the tarot, but in reality containing it) is the Magician. The Magician’s planetary trump is Mercury, and from there he draws all inspiration. The god of thieves and commerce, Mercury is truly at home on the street, and taking money from people, using whatever means necessary in order to achieve his goal. As the messenger of the gods Mercury is the carrier of the word, but more importantly, not the word itself. He is given passage in and out of the underworld as psychopomp (guide to the spirits of the deceased), but has no power over who lives or dies. Mercury, though, as a trickster, is certainly not above letting people believe that the powers he represents are in fact his own, for the talents of the trickster are powerless without the belief of her audience; the illusion is worthless if its smoke and mirrors are easily penetrated.

Our Magician is, at heart, the master of illusion. From street hustler to Vegas performer (and perhaps even graphic designers), all spirits engaged in the act of illusion are calling upon the Magician. His quickness manifests itself in his sleight of hand, and his powers stem from his ability to manipulate the world around him to his advantage. Young Hermes, born in a cave with nothing but his name, steals his brothers cattle in order to have something of his own, and in the process invents the lyre (a wonderful English pun), giving it to his big brother Apollo in exchange for the stolen cattle. The Magician is adept, if not down right comfortable, creating something from nothing, whether taking it from someone else, or using someone else to get it for her.

Generally amoral, the Magician know allegiance to anyone but herself, and keeps no code but her own; she is friends to all, beholden to none. She does not mind manipulating someone to get what she wants. Though this habit can often backfire, it rarely bothers the master trickster, since she has almost no problem talking her way out of it, trusting her natural sense of showmanship to deliver her from the hottest frying pans she might find herself in.

On a mundane level, the Magician also represents mastery of tools, especially to the point of convincing our audience of her otherworldly ability. The Magician may not be supernaturally powerful, but she is tirelessly trying to convince everyone that she is. The ball is never in the cup we think it is, the Queen of Hearts has disappeared, and we walk away convinced that the woman was in half. In the same way the trickster is a master of language, both as a seducer and manipulator. The pun is a wicked weapon in her mouth, she makes language dance as if alive. She means what she says, except when she doesn’t, and if you feel she’s in the wrong, then you’ve certainly misunderstood. For Mercury this was as easy as breathing, but for the human Magician, this mastery comes with tireless practice and repetition, a task that she does not mind, as she knows that mastery will bring its own rewards, that chance favors the well-prepared.

Read more about the Magician and his transformation from street thief to divine messenger here!