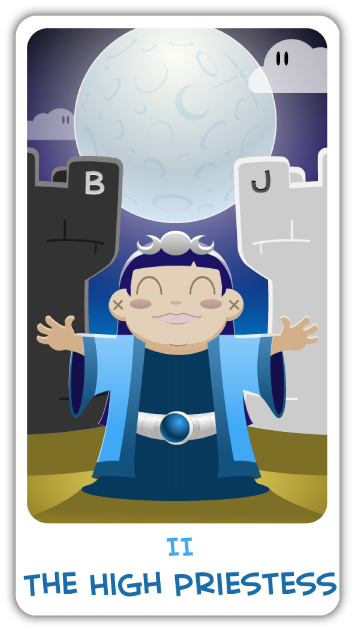 Deciphering the High Priestess was a bit of detective work. As with all of the cards thus far I’ve gone back to the original name from the 15th and 16th centuries, usually from the Tarot de Marseilles. Much of the Magician’s influence came from Le Bateleur, and much of the High Priestess’ influence came from the Papess. There are two legends associated with the Papess, neither of which I’ll enumerate here, but neither of them lent much light on what made the Papess special or differentiated her from the Pope or Heirophant much, since neither of the legends lends any distinction to the role of Papess, and serves to illuminate very little except how much the Catholic church loathes the emodiment of female spirituality and seeks to crush it out wherever it may raise its head, violently and vindictively.

So the work was to be my own. I started with the basic symbolism of the Pope, his crossed keys and reflected it for the Papess. Clearly if he is represented by keys, then she must be the keyhole. It held a certain crudity for me at first, a certain banal obviousness and perhaps a touch of degradation, but the more I explored the idea, the more that I liked it: The High Priestess is, essentially, the holder of space. This hardly seems a glorious attribution to give to someone I see as a figure capable of conjuring the powerful forces of the unconscious and making contact with the divine, but much of what I find degrading and inglorious about the concept of holding space comes from being raised in a highly rational, male-dominated society.

This space holding matches neatly with the Qabbalistic application of the High Priestess as well. She is represented by the Hebrew letter Gimel, the Camel, and her path, 13, is the only one joining Tiphareth to Kether, crossing the abyss in the process. While all the paths hold space for their sojourners to travel from one sephiroth to the next, none are as long as 13. Similarly, we can transform Gimel, the camel, into a tunnel through the desert of the abyss that separates the supernal triad from the other 7 sephiroth.

A second important note relating to the High Priestess is her inevitable comparison to the Magician. Numerically this is impossible to avoid, especially for those traveling in Qabalistic orbits. The growth from 1 to 2 is only slightly less profound and fundamental to consciousness, both mundane and metaphysical, than bootstrapping from 0 to 1. Thus the comparison and reflection of the Magician to the High Priestess is understandable, but I think incomplete, ignoring, again, the original roots of the cards and their contexts. I think it quite a bit more interesting to consider the High Priestess as the beginning of two pairs, which then form an interesting quartet.

Studying the High Priestess in her current order following the Magician it is interesting to me to see Priestess, Queen, King, Priest. They are set up, I noticed, like the four real central squares on a chess board: the King and Queen and their two bishops. While the High Priestess and the Empress are often compared as two representatives of powerful femininity, there often seems to be conflict or at the very least distance implied in their relationship in the way that the Emperor and the Hierophant do not seem to suffer. Perhaps we are reluctant to drag down our priestess of the Goddess into the mundane bondage of Empress, an understandable reaction of the suffocation of women and female divinity by a fearful and violent patriarchal overculture, but I think it more useful to see the High Priestess working in concert with the Empress, standing by her, over her shoulder, eyes closed, whispering into her ear, sharing with her the secrets of the stars, holding space for her Queen that she might rule well and long.