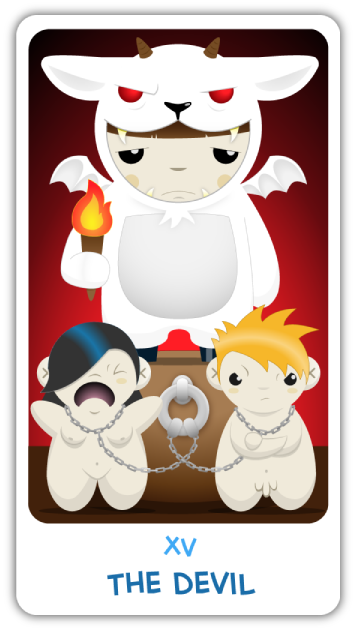 XV The Devil is, at its heart, a symbol of blockage, though it may not seem that way at first. Initially it may appear to be simply a little boy in a goat costume torturing two angry hipster dwarves, but as with so much in the tarot, the surface can be deceiving.

According to Crowley the Devil represents "creative energy in its most material form," and while Harris’s version represents this very well, Pamela Smith’s version is slightly less direct about this. The traditional image seems to be much more about the restriction and fear of creative energy, the blockage of that energy than it does about releasing it. This fundamentally shifts the meaning of the card from the Waite Smith to the Thoth Tarot, though I personally find the Waite Smith image more useful as a communication tool.

The figures in the card are chained to the altar upon which the Devil stands. In the Chibi tarot there is no question that they chained themselves to this altar. At first it was fun and sexy to dance with the Devil, but after awhile it got old and burdensome, but they’d forgotten that they chained themselves up and that at any moment could release themselves. Each of the chains around the necks of the hipsters has a broken link which they can use to unchain themselves any time they’d like, but they refuse to do so because being chained to their fears often seems easier than facing them and the freedom that would result if they chose to release themselves from them.

The Devil, like Prometheus carries a torch, the symbol, in this case, that should we choose to address the Devil, instead of just dressing him up in the clothes of our fear he will use this torch to light the way to our freedom. It is Joseph Campbell who so rightly addressed this card, perhaps unknowingly, when he said, "Gods suppressed become devils, and often it is these devils whom we first encounter when we turn inward." As we grow in our understanding of ourselves, as we choose the fear of freedom and release ourselves from the chains of our own complicity, as we befriend the devils we have placed upon the altar in order to have a scapegoat for our own lack of motivation we will turn their power to our own ends instead of using them as an excuse to hold ourselves down.

One Response to “XV The Devil”