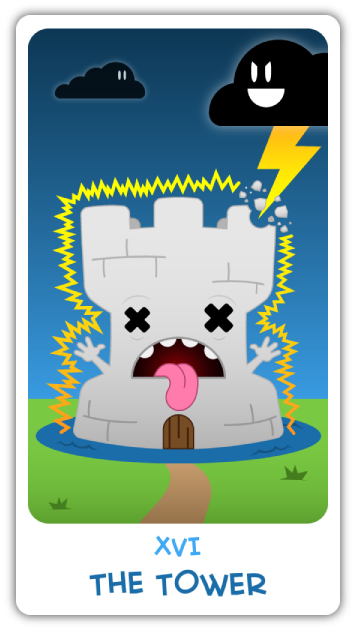 Historically the Tower is most easily associated with the christian Tower of Babel, symbolic of man’s heretical attempt to reach heaven through physical means rather than divine ones, and Yahweh’s punishment of this mortal hubris. Like the misshapen myth of the Garden of Eden straightened out and retold in the Lovers card, there are other ways in which we might interpret the lesson told by the Tower. One of my favorite reinterpretations is of Sergio Toppi’s, in whose Tarot of Origins the Tower is retitled “Menhir” or standing stone, and shows a lone figure atop a giant rock, staring off into the distance. This meaning, the moment before the fall (a weighted phrase if ever there was one), to me implies that with great vision comes great risk; that to do large things in life we risk the destruction of the very thing we meant to create, and perhaps even ourselves. This risk-reward relationship seems much healthier in the long run than the risk of divine wrath should we arrogantly rise above our station and attempt to reach for the stars.

So let us, even for a moment, discard this ideas of punishment and retribution from our oracular vocabulary and look inward, which is where the real story is anyway. Let us begin our retelling numerically. Though normally I dislike numerology, gematria and like sciences, since, as with facts, we can make numbers say whatever we want them to, in this case our numerology is quite simple, quite restrained and quite symbolic. The Tower is card 16 or 42, a square of the square. The Emperor’s impetus for security taken to its nth degree; the desire for safety realized and compounded; it is not a coincidence that this Tower is in the mode of a castle’s keep, for it is the foundation laid by card 4, the Emperor, built upward and outward in the long for perfect security, the desire for ultimate safety whose final end is a lonely, quiet death.

This safety, is merely a reflection of inner insecurities, not outward dangers, tho the builders of towers and walls conjure these fears, luring them from the secret chambers of our hearts, with more skill and seduction than a witch her dearest familiar. The towers that we build for ourselves as bulwarks against the enemies and dangers that we perceive in the world are both incredibly important and deeply flawed, built hurriedly out of fear rather than in pursuit of beauty, we find that tho they protect us well from the enemies we’ve perceived, they are dangerously vulnerable to the dangers we’re blind to, as the unlucky Tower in this card so shockingly discovered.

The Tower is symbolic of the power of unknown unknowns. As Nassim Taleb puts it in his book The Black Swan, “It is unpredictable; it carries a massive impact; and, after the fact, we concoct an explanation that makes it appear less random, and more predictable, than it was.” This is the Tower in its essence. We are, as humans, always building walls, shoring up pieces of ourselves, physical, spritual, mental and emotional that we suspect of weakness or vulnerability. But no matter how much time we have invested into the resilience of our fortress, there is always a bold of lightning waiting to reduce our walls to rubble, a black swan to shock us into silence.

Surely, then, the lesson of the Tower is simply to accept the inevitability of the sudden thunderclap and invest in flexibility rather than in fortification, to practice forgiveness rather than resentment. The more we carry with us the greater the mess when the thunder comes and the walls fall down. It is, I suppose, an inversion of the ant and the grasshopper, as so many of the lessons of the tarot seem to be. Rather than building up our stores for the winter we might be better served enjoying the shortening days of summer, for though the ant may hoard more food than he needs, he cannot control the loss of it to the caprice of a curious child or the slithering tongue of the hungry aardvark shooting down from the sky like an unexpected bolt of lightning.

3 Responses to “XVI The Tower”