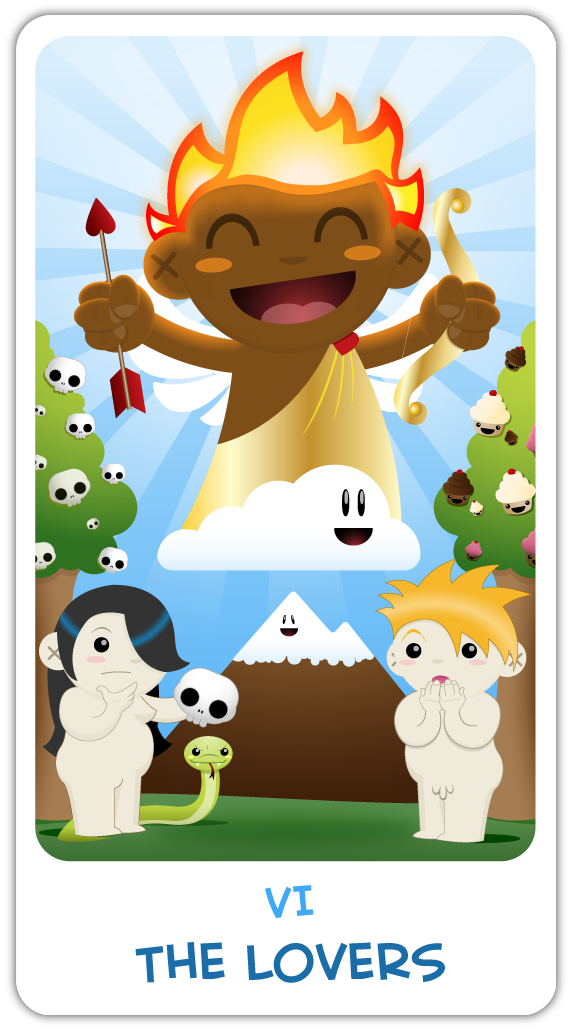 In the Waite Smith deck the Lovers card is displayed as the allegorical tale of Adam and Eve. It’s a tale that just about everyone in the Western world is superficially familiar with: Adam and Eve are in paradise until the snake seduces Eve into eating the apple, then Eve turns and does the same to Adam. As punishment they’re cast out of Eden into a life of blood, sweat and tears. My version of the Lovers is about that same choice, and reflects the way that the lens of Christianity has historically distorted the traditional hero’s journey, transforming it from a story of thrilling adventure into a moral tale of shame and divine retribution.

Our familiarity with the story and its moral, that disobiendience leads to shame and punishment, is what makes it so difficult to see christianity’s bait and switch. The Adam and Eve story is has many of the core elements of Joseph Campbell’s hero’s journey: leaving what we know to make our way in the world and eventually return a very different person. Christianity has recast many of the good things as evil: the regular world (possibly even ignorance) becomes a paradise; the unknown is a place of danger, punishment and death; our spiritual advisers are evil seducers; the boon that we are granted becomes instead a shameful burden.

These profound changes in the hero’s journey are a perfect reflection of the christian idea that mortal life is a burden we must bear, separating us from God and keeping us from our eternal reward in the paradise of heaven. As such, christianity’s founding myth asks us to consciously misinterpret our own powerful self-awareness as a the shameful contamination of original sin that separates us from the divine, which we cannot personally atone for, but must be forever in the debt of a mythical savior whose ultimate sacrifice is the only cleanser which can remove this stain.

My card chooses to fundamentally reject such an unhealthy frame of reference and cuts away the twisted Christian myth to restore the original, exciting and empowering lessons that have been so brutally shattered by our culture. Here, in this allegory, Eve stands on the moment of the threshold, which in this story also functions as the abyss, holding the apple: a kind of death and rebirth. If she eats the apple she will be cast out of everything she’s known, but she will know herself deeply and intimately; she will find herself, naked and reborn. As such, she will begin a journey, a journey whose details and whose end point we’re never told, at least, never told in the book that made her so famous. Her transformation, atonement and return are obscured by the intentional omission of the patriarchs, but I am sure that, despite, or rather because of, the intensity of biblical propaganda that she did not regret her decision or its consequences.

But here, early in her life, at this precipice, she can, if she chooses, cast down the apple and embrace the illusion of the cupcakes on the other tree. The choice is hers, and that choice is central to the meaning of the card, as it has been since the emergence of French tarot in the 17th century. Though the allegory of the French tarot was a choice between Virtue and Sensuality, here our choice is between illusion and truth (cake or death). Eve is essentially holding the death card in her hand, deciding whether to die and be reborn, beginning her journey outside the paradise of the known (perhaps surfacing under the light of the glowering moon in card XVIII), or continue to maintain the illusion that she hasn’t outgrown her surroundings. The trouble with overstaying is that things don’t improve from here, and the illusion requires more and more reinforcement the longer that she stays; cupcake after cupcake to be maintained. The truth of the choice is that there really is no choice at all. We can only delay the inevitability of our growth, and in doing so the illusion of paradise will continue to fall apart.

But Eve is only one piece of this equation. Above her the angel celebrates, not because God wants Eve to fail, but because God wants her to succeed, god wants us to leave the garden. This reversal of god’s traditional christian stance of judgment and shame at Eve’s illicit consumption straightens the kinks in the twisted myth, simultaneously embracing the most basic and fundamental critique of the christian mythos: If God didn’t want Adam and Eve to disobey him, why did he put the trees in the garden?

The question puts most Christians into a bizarre theological tailspin because it reveals the basic perversion of the heroic myth and divine intention: that god is rooting for us to leave the garden. God, if that’s a route you choose to embrace, gives us knowledge of good and evil, and self-awareness as a gift, not as a curse, because she wants us to grow, mature, and venture out on our own. She wants us to eat the apple, she wants us to move forward, to choose death and begin our journey towards reunion with her; a reunion which would be meaningless if we never chose to leave, or worse, never had the choice to leave. Because, truly, there is no good reason for a benevolent god who is invested in our happiness to encourage us to fail, as much christian theology would have us believe. Instead, we can relinquish the very idea of our mortality as implicit proof of our failure, and come to see it as a celebration of our sensuality and our fleeting, embodied beauty. Then, and only then, do Eve’s choice and god’s design make perfect sense.

The new risk in this reversal of the Eden myth is this: that not everyone will choose death and eat the apple. Given the choice, they may choose illusion over truth, they may choose to remain stagnant in the safety of what they know rather than choose the danger of growth and the unknown. The true danger of choice in the hands of mortals, then, is not that we will eat the apple, but that we won’t; that we will, in our fear, choose the cupcake over the skull over and over and over again. Not only will we do this as individuals, but also as communities, and those communities will naturally come to codify the cupcake as the right, good and holy choice, that we will as a culture enshrine the apple as evil and the cupcake as good, that we will come to worship ignorance and illusion at the expense of truth and growth. This is the true danger of choice that has been so well buried by our culture beneath the poisonous and misleading story whose false note of truth has burdened our culture for nearly 1,500 years.

One Response to “06 The Lovers”