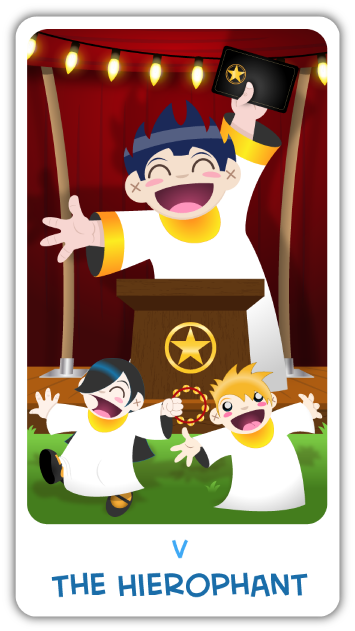 The fifth card in the deck, the Hierophant, is one of the most misunderstood in the tarot. One of the main reasons is that the Hierophant might be misunderstood (and generally looked down upon) is that his original incarnation was that of the Pope, the head of the Catholic church and one of the most influential figures in Christianity as a whole, generally frowns upon the use of the tarot, and by proxy, those who use it. Tarot users, and artists apparently, are only too happy to return the favor. Thus the Hierophant has become a negative and dour card, who’s come to represent the uncompromising and judgemental monolith of the Christian church.

Most definitions of the Hierophant include some variation of what Wikipedia says: “The card stands for religion and orthodox theology.” I’ve already alluded to the fact that it seems like most folks just read “Christianity” there instead. But I would argue that even if we remain neutral and don’t read Christianity into “religion and orthodox theology”, we’re still working with too limited a definition for the Hierophant. The Hierophant represents the church, sure, as in the ruling body of any religion, but I think the Hierophant also represents church, as in going to church. Not just the building a religious body meets in, but the act of communal worship and everything that comes with it. The Hierophant represents the religious community, and the religious community united in worship.

Because the Hierophant has so long held the place of looming church and the inflexible orthodoxy much his potential joy has been drained away and replaced by stern, unbending authority. The Hierophant is our religious guide, he is the figure who brings us, the body of the church, helps to unify us, to help us find something common, and connect us as a body with the divine. This is a special and powerful and joyful thing, but a thing that is too often missing from contemporary religious experience.

Thus, the loss of joy in the Hierophant is a clear reflection of contemporary Western religious experience. Certainly the religious history of the West, and especially the history of the US, focuses on the more negative aspects of our relationship with the divine, shame and damnation, to the exclusion of joy and celebration. But the Psalms and the Song of Songs are still a part of the Christian tradition, even if they’re misunderstood or ignored; joy is still a core part of our religious DNA, even if it’s often ignore. Clearly part of what we’re craving as a culture is the joy that communal religious celebration. Thus, here, in my Hierophant, his unbending stone pillars have become the flexible poles of the old time revival, and his crossed keys barring our entry to the holy of holies has become the five pointed star, burning with divine intensity. The hot summer day has cooled, the preacher man is in town and everybody is ready for the dance. The man in the pulpit is preaching the good word of the Goddess and he’s inviting us to be a part of the universe, the spinning of the planet and the motion of the stars themselves.

This is the duty of the Hierophant, to bring us together as a community and show us the joy of celebrating the divine, to help bathe us in the purifying power of joyful effusion, to seduce us into the exercise of the powerful joy of our physical embodiment and simultaneously connect us with the towering potential of our spirit, and remind us how to weave the two together and strengthen the bond between them. This is not an easy thing, but it is a powerful one. The duties and the responsibilities of the Hierophant are ecstatic and exhausting. This is not the only thing that the Hierophant represents, but it is certainly the thing that has been missing from his card for a long time. The Hierophant must also manage the body of the group over the long run, meet the needs of the congregation and help to guide it and challenge it, to be safe, but not so safe that they become stagnant. It is a delicate dance, done individually with each member of the congregation, and with the congregation as a whole.