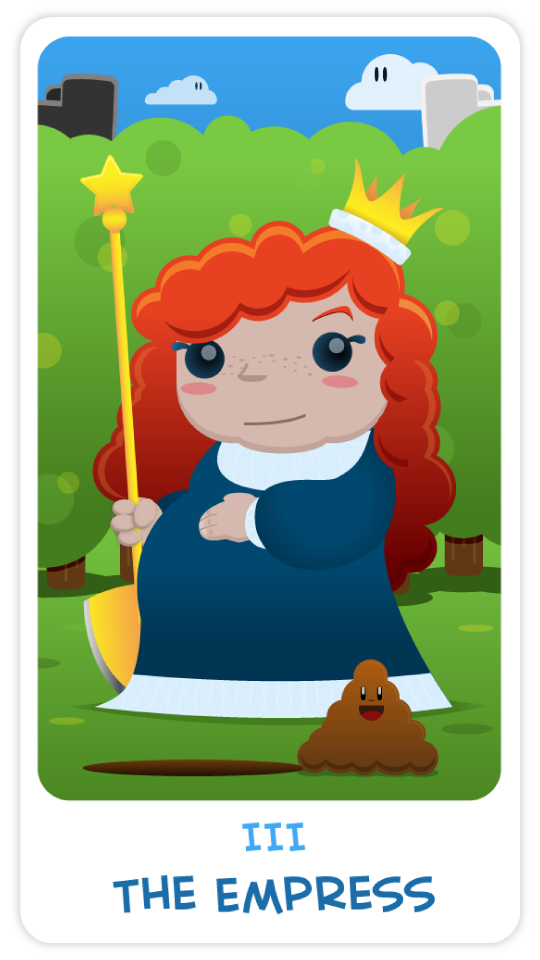 My first real insight about the Empress came when I was seeking understanding about her companion in the Temporal Rulers, the Emperor:

Thus, [the Empress’] pregnancy is not a literal pregnancy, but the symbol of her ability to bring forth into the physical world the shape of her desires based simply on her will. It is not itself a symbol of fertility, but like the High Priestess, a symbol of passage: what begins as an idea germinates magically inside of her, gestates and then is made into a physical reality.

My empress carries a sceptre that doubles as a shovel, because, let’s be honest, in this day and age, who can afford the help. She’s a girl who doesn’t mind getting her hands dirty and making the changes she envisions in the world. She enjoys getting things just right, and also knows how to enjoy and rest in the space that she has created for herself, because she knows that the work is worthless if she can’t also enjoy it; if it doesn’t also feed her in the way that she feeds it. As a woman deeply connected to space and physical presence, she values and learns from the earth, and therefore understands the value of a fallow field, and knows that she too benefits from rest and recharging.

In the same way, she sees her body as its own ecosystem and knows the value of cultivating and nurturing it. So one of her incarnations is certainly that of the voluptuous and sensuous beauty whose ripeness is alluring on a fundamental level, a flower whose nectar is too sweet to ignore. But let us not mistake her earthy sensuality as a kind of frivolity or untrustworthiness (though certainly the Empress reversed might imply such a thing). It is one step in an ancient dance, the intensity and ecstacy of creation, and really, the joy of sex and seduction.

The Empress’s main Kaballistic designation is the Hebrew letter Daleth, which translates to ‘door’. She is the door to our house, our own physical private place, the guardian of our own space. She is the house; the emperor is the city. The Emperor necessarily thinks he’s more important, but the Empress knows that she is the building block of all civilization. She is the voice of the individual amidst the hubub of commerce and civic duty; she is the call to human warmth admidst the unfeeling necessity of civic maintenance.

She is A Room of One’s Own, the door the remains shut until the moment for emergence is ready. She knows the necessity of privacy for the possibility of creation. She is the passageway from idea to reality. Her yoni is the portal from the realm of spirit to the realm of flesh; she is the engine of incarnation for the inspiration and ecstacy experienced in the High Priestess.

There are easy correlaries for the Empress among us: Gardener, interior decorator, designer; the manicurist, the pedicurist, the make up artist. Her realm is deeply personal: the body, the house and the grounds; the Emperor’s realm is what lies beyond, the management of the collection of houses we call a town; the management of the collection of bodies we call a family. The Empress is the queen of the self and the guardian of our personal boundaries.

But let us not limit the size of her power by the size of our imagination or image. Imagine a mother the size of a planet, her pregnancy ripe and pulsating with potential, with power. Let us not demean or belittle the power of the Empress with the limitations of our imaginations to the size of a human body, but let us imagine a grand world, a giant of a woman whose gestating body produces change across cities, states and nations. While I am deeply invested in the power of personal change (my motto for this tarot is Socrates’ quote “They who would move the world must first move themselves.”) but in this case I do not want to limit this woman, whose unmasked potential is none other than the World, simply through myopia or navel gazing. She is a powerful and private, but those private productions in which she is invested in are not simply changes to the decor or even remodeling; they can be as grand and far reaching as anything that the Emperor may have in store for the things over which he is charged with caring for.