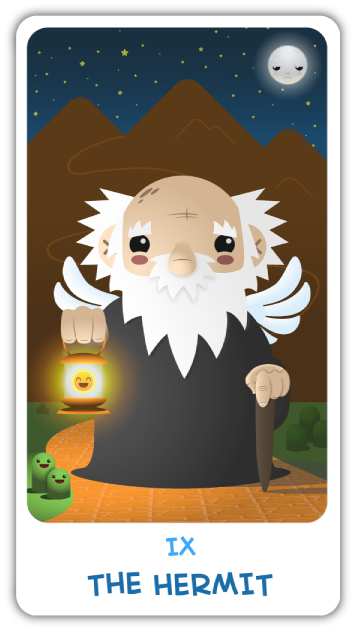 The Hermit, any hermit perhaps, but certainly this one, is most obviously about withdrawal, specifically from society, in order to hear something more clearly. Society’s workaday cacophony is too loud for him to hear what he is listening for, whatever that might be (and perhaps it’s different for each Hermit). I think we might safely say ‘communion with the divine,’ since Western hermits have a long religious tradition, and because along with those medieval hermits we can also throw in yogi ascetics and, as this card suggests, the Yamabushi hermits of Japan, who, according to legend, withdrew from society for the pursuit of supernatural powers through the study of shugendo.

The traditional Waite Smith image of the Hermit is one of my least favorite images in her Tarot because of the strange way that his body is proportioned. While even great artists fudge proportion in order to make great works of art (see Michelangelo’s Pieta for an excellent example) the legs of the Smith Hermit are absurdly long, throwing his entire body out of proportion and positioning him awkwardly in the space of the card. In fact he’s so long if he raised his head from the bowed position it’s in he’d hit it on the Roman numeral hanging over him. Smith has also shifted the Hermit far to the left of the frame so that the glow of the lantern is cut off by the left edge of the image, leaving, for no apparent reason, a long gap along the right hand side of the card. It’s possible we could contrive a metaphorical rationale for the awkward placement of the Hermit in the frame, something along the lines of it being representative of his discomfort in the world, but I don’t think that’s necessary.

Pamela Coleman Smith, Wikipedia tells us, was a commercial illustrator, so she knew her business. But the 80 images that comprised the deck were completed in six months, meaning that she was producing roughly one card every two days! (http://en.wikipedia.org/wiki/Pamela_Colman_Smith#The_Smith-Waite_Tarot) My guess about the Hermit is that he just got lost in the shuffle, if you’ll pardon the pun. Smith’s Hermit is far plainer than many of the cards that she drew (see the Fool for a lovely example of balance and detail in her deck), and my guess is that under an intense deadline she just rushed through the Hermit, leaving him awkwardly posed in his card.

Our Hermit has a little more dignity, I hope. He is an old, frazzled man, road-worn, but not what I would call dirty. His hair and beard are unkempt and poorly cut, perhaps with a sharp stone, perhaps not at all. He walks with a cane and carries a lantern to help him find his way. He has, most uncommonly of all, a pair of white wings on his back that mark him out as one of a Tengu Yamabushi a “barefooted, wandering, elderly mountain hermit or monk with an extremely long nose” who “takes on a protective role in the affairs of men”. In his lantern shines the Sun, a symbol of external, rational, masculine energy, while in the sky above the Moon, a symbol of internal, emotional, feminine energy watches over our Hermit. This inversion of powers, the sun within and the moon without, is symbolic of the contradiction that the Hermit embodies: he is an individual who has spurned much of human society to go looking for what it is that makes us human. In the same way the represents both the need for human connection and the desire to withdraw from it. He is both a master or guide who can help us on our way, and internal spirit of seclusion and abandonment that longs for personal connection with the divine.

The visual connection with the XIX The Moon is also important here because the journey begun in the turbulent dark waters of the pool under the glowering Moon is carried further here by the Hermit who may walk a long and lonely path, since that first step into the taboo is often taken in isolation as we consciously choose to leave behind the familiar and take up what we once considered blasphemous. Perhaps the coin that the scarab held in card XIX now lights the Hermit’s path, magically activated by the old man and slotted neatly into his lantern glowing merrily throughout the long night’s walk.

Perhaps the most important part of the Hermit is that he is still looking, that he has not found what he is looking for, that, if he was able to find enlightenment, he has not accepted it and continues to walk the earth. We do not know how long he has been at it for. Perhaps he was a fresh faced Fool when he began his wandering and has grown old in the process. Perhaps he only began last week. The one thing we do know is that he remains unsatisfied. He was, I suspect, unsatisfied when he was a part of society, and that dissatisfaction, that inability to become satiated by everything that society had to offer drove him outside of the city to find what he was looking for in nature, certainly the mythic journey of that most famous of mendicants, Siddhārtha Gautama, begins this way. Even now, in his wandering outside of society, he still hasn’t found what satisfies him, or if he has, that hasn’t stopped him from continuing to look, and perhaps light the path for others who might also wander the same way the he does.