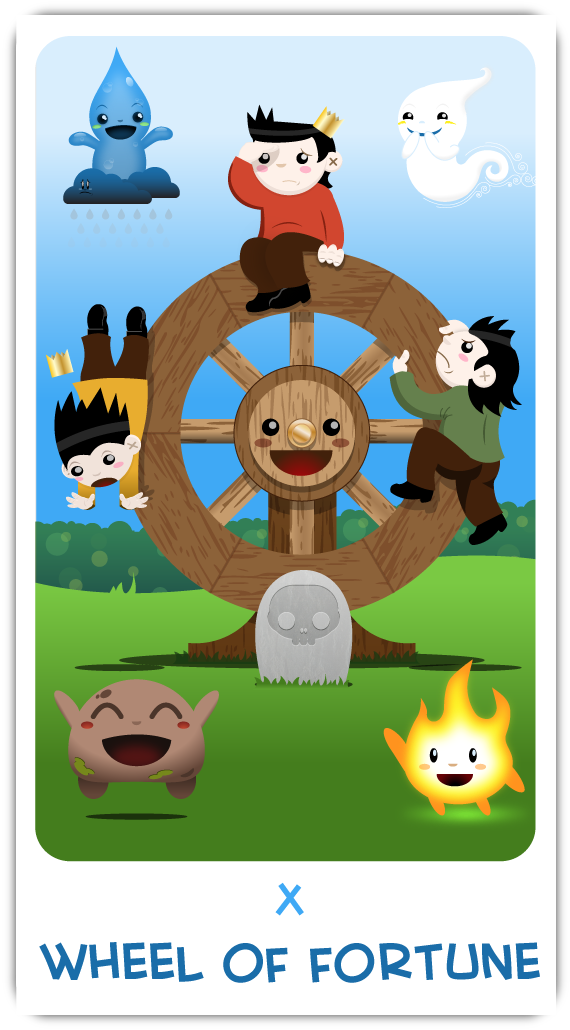 It is easy when looking at the Wheel of Fortune to fall back on what I think of as Lion King Logic: Dudes on a wheel + some death = the circle of life. It’s a plausible conclusion, but I think it’s the wrong one, or at the very least, too superficial to do any good.

The first clue to the fact that that Lion King Logic leaves us wanting is that if the Wheel of Fortune is meant to symbolize the circle of life, then what is the Death card meant to symbolize? Sure, there are more circles to life than just life and death, but at its heart the Death card more succinctly and precisely gets to the heart of the circle of life than the Wheel of Fortune does, and while there is certainly some overlap in the cards, and overlap of this size seems to smack of redundancy, and in my experience the tarot is anything but redundant.

So if the circle of life is out the window, what are we left with? In 78 Degrees of Wisdom Rachel Pollack spends more time on the Wheel of Fortune than on any other card in the Major Arcana, examining the many ways that the card can be interpreted: As a medieval allegory, as a symbol for the mysteries of fate and gifts of fortune, as a representation of the laws of karma, and as a symbol of reincarnation. While I think all of these are true, I don’t feel that she ever quite draws the lessons together to come to a coherent meaning for the card. Perhaps the wheel, the circle is so basic a symbol as to escape being pinned down, but again this theory feels like a cop out, since much of the major arcana are big enough symbols to encompass a great many definititions.

Pollack comes closest to my own understanding of the card when she speaks of Buddha coming to enlightenment and stepping off of the wheel of life. His separation from the cycle of life allows Buddha the distance from his habits to see them for what they are: endless cycles that are difficult to recognize as cycles. The Wheel of Fortune speaks plainly to the tendency of human beings to make the same mistakes again and again in their lives without realizing that they’re they’re repeating themselves, without seeing the pattern . Getting off the wheel and truly finding direction (as the next card Justice/Adjustment so energetically shows us) is the key to unlocking this card.

This is why the other popular interpretation of the card, the inevitability of change, falls so short of being a meaningful interpretation for me, because while there is change within the cycle, the patterns and habits of the cycle itself are being repeated in the cycle as a whole. The Wheel of Fortune symbolizes superficial change without substantial difference in outcome. The man at the beginning of the wheel thinks for sure this time will be different, but ends up the same place he was last time, literally a dead end. His energy has met with dissipation through by participating in the same pattern that it did last time. And while the energy will recuperate without knowledge of the cycle the folks on the wheel can’t escape.

And that’s the joy of getting what is to me an otherwise disappointing card: We’re on the outside looking I. As the audience we’ve created the distance to look down on our cycles. Hence the presences of the elements: We’re beginning to see the composition of our own self-limiting behaviors, the fundamental building blocks of our dysfunction. This isn’t the complete and holistic understanding that will come with the Wheel’s sister card, The World; it is in fact the beginning of that journey, hence the immature manifestation of the elements that will find their full expression at the end of the major arcana, but without this realization it’s difficult if not impossible to achieve the kind of understanding symbolized in the world. And the epiphany of the dysfunctional cycle isn’t enough to end it. There’s a lot of work yet to be done to undo those self-destructive patterns, but at the very least we have the Wheel to come back to as a touchstone of perspective and accountability.