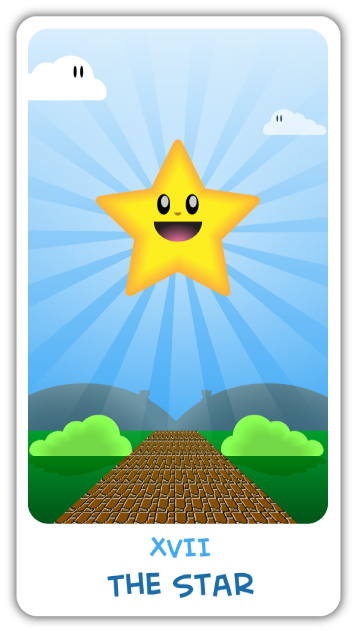 Given the video game influences of this deck the Star illustration was an easy choice: The star from Super Mario Brothers. In that game the star is the most powerful power-up available, giving the player unlimited invulnerability for a short period of time. Once Mario or Luigi gets the star they can die only by falling off the stage, they are otherwise invincible…for a very short time. The god-like invulnerability of the Star is temporary, a momentary breakthrough when we touch divine power and are instantly recharged with energy and insight, the ability to conquer what previously seemed impossible. Its arrival, perhaps like a shooting star, is unexpected and brief, but powerful and fulfilling while it lasts. In this version of the card the finite nature of the Star is symbolized by the two towers on the hills in the background, foreshadowing an impend- ing visit to strange lunar influence of the Moon.