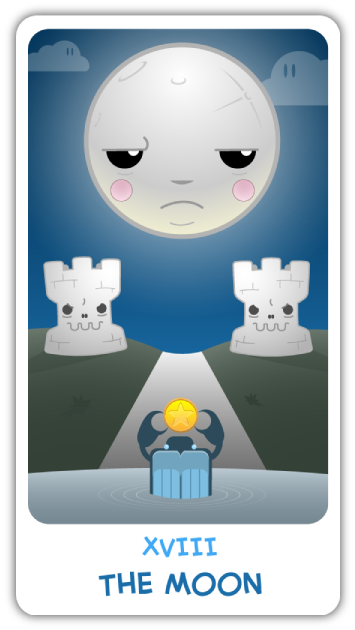 The Moon is a card I never understood until I drew it. It lies near the end of the deck, smack in the middle of a cluster of astronomical (astrological?) objects whose superficial attributes were enough to scrape by on when I would do readings.

The Moon, hm, well, it’s like, it’s at night, so it’s dark, and it reflects the light of the sun, so it doesn’t really show it’s own light it survives on the energy of others, and that waxes and wanes, so you really can’t depend on it. Does that seem meaningful to you?

My readings were not the greatest, I can tell you.

Now though, she makes more sense to me. The Moon is the second card in the Major Arcana to reference the planetary body we call Luna. The first card to do so is the High Priestess, whom Luna influences astrologically as one of the 7 ancient planets. The High Priestess represents Luna at her most beneficial, the link between the mortal and the divine as represented by her path on the Tree of Life connecting Tiphareth to Kether. XVIII The Moon has no such hallowed place on the tree; it’s one of the three lowly paths connected to Malkuth, the Kingdom, and as such is tainted by its wholly manifested existence and its shameless mortality. This taintedness represents Luna at her lowest aspect and is embodied by tarot card XVIII The Moon. This comes through pretty clearly in in Lady Frieda Harris’ depiction of the card, though less so in the Waite Smith, whose light colors leave much to be desired in terms of moody atmospherics.

Though the Moon, like Death, is a superficially negative card, its message, to me, is ultimately a beneficial one. Winson Churchill said ‘If you’re going through hell, keep going’ and Lon Milo Duquette says much the same about the Moon, and though I think these are both fair points what is more important to me in the deep reading of the card is: what kind of hell are we in? I tend to obsess, perhaps more than is necessarily healthy, on the reasons for things. One of my favorite hobbies is etymology, learning the roots of words, then breaking them apart and recontextualizing them to find new and different meanings, and I approach the tarot in a similar fashion. I am sure it is not the first question that the traveler asks upon being stuck in hell, but I think it can be a beneficial one, especially if the ultimate goal is getting out.

So what is the nature of the hell that we’re stuck in? The hell represented in the Moon is a very specific kind of hell, a very social hell: The Moon represents the space beyond the boundaries of cultural acceptance. What this means is that each of us has a personal map of what is and is not an appropriate way for people to think and behave, and on the far side of that line, deep into the realm of what is unacceptable, is where we find ourselves when we awake, blinking up at the Moon. The two skull-like towers grinning menacingly at us may be considered the guardians of all that is good and proper, and are there to keep anything on the other side from coming in.

Crowley puts it this way:

This path is guarded by Tabu. She is uncleanliness and sorcery. Upon the hills are the black towers of nameless mystery, of horror and of fear. All prejudice, all superstition, dead tradition – and ancestral loathing, all combine to darken her face before the eyes of men. It needs unconquerable courage to begin to tread this path.

Such is the vision of the Moon from the place of social acceptance. What is taboo, what is unclean and fearful is also what is unknown. The Moon is the space of the unexplored layered over with fear of the unknown and manifested as superstition. The positive side of the Moon is that it’s a chance to get in touch with our demons, to know our fear, if we can calm down long enough to realize it. The way to accomplish that is rarely clear, since much of fear relies on darkness for its survival, and the exploration is difficult and tedious, but the rewards can be great, as the scarab clutching the golden coin shows us, surfacing from the unconscious with a stunning idea, concept or possibility, tempting us to wander down the path into the realm of the unknown, unclean and untouchable.

Much of what limits me in my life is my unconscious certainty about what is and, perhaps more importantly, what is not possible. The dark side of unconscious map is where the moon lies, and there are likely many great ideas that lie within that darkness, but in order to get to them I’ve got to go off the map, penetrate the borders of what I believe is impossible, and within that dark place many strange and impossible things are likely to transpire. In venturing into the fearful unknown I not only risk losing my community, be it family, friends or coworkers, for violating the taboos of the community, spoken or unspoken, but I also risk losing my self as previously constructed, and may not recognize myself upon returning. The question then is one of desire, whether clutching the golden coin, be it worldly wealth or spiritual understanding (or both!), is worth sacrificing both who we are and what we know for.

It is not surprising then that on our journey up the Tree of Life, from Malkuth to Kether, the Moon is one of the three primary paths from which we might choose, and an excellent description of the first step in the heroes journey; it is Samwise Gamgee’s pause at the edge of his experience, going further from the Shire than he’d ever been before, and confronting more of the waning Moon than he ever expected to. Yet, as Crowley reminds us, "…the best [people], the true [people], do not consider the matter in such terms at all. Whatever horrors may afflict the soul, whatever abominations may excite the loathing of the heart, whatever terrors may assail the mind, the answer is the same at every stage: ‘How splendid is the Adventure!’"

2 Responses to “XVIII The Moon”