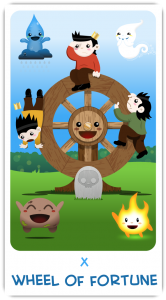 – Tarot, as a system that attracts intuitive, artistic people, is understandably most critical of the element that represnts the power of rational thought and the home of reason: Air and its suit, Swords. Redeeming the power of air is key to balancing the elements and utilizing what the rational mind has to offer. – […]
The Magician is a card with two distinct personalities. Before the early 20th century resurgence of interest in the occult the Magician existed humbly as Le Bateleur, which Wikipedia defines as ‘the Mountebank.’ A mountebank, for those of you less interested in 19th century jargon than I am, is simply a cheat. The Magician wasn’t […]
Most of you who are interested in tarot and actively reading in the tarot community will probably already have heard about this film that’s being made. I can’t remember where I read about it, but I know that Mary Greer posted it on her blog recently, and reminded me of it. Today I donated to […]