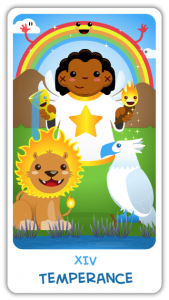 I struggle a lot with the use of the tarot. I am not naturally a tarot reader, at least, if I am I haven’t discovered the way that works best for me. I struggle with the phrasing of the question and the structure of the answer that the tarot provides. I struggle with structuring the […]

As I wrote about in my last post, I’ve been immersing myself in Joseph Campbell’s seminal text, The Hero With a Thousand Faces. Being plunged so purely into the essence of mythology is revivifying. Being bathed in the the totems and talismans of cultures from across the world and watching as they’re woven into a […]
The world is an oracle, if we know how to read the signs. I have no doubt of that fact now, after having spent nearly 2 years producing my own tarot deck and related materials. And wisdom and insight into the tarot often come from unexpected place. I’ve been struggling with deep understanding of card […]
I spoke briefly in my comments on Justice about it being the center of the tarot, and I’ve mentioned before about a card’s placement within the first, second or third line of the tarot and I thought that I’d address that for a moment, since I’ve never explicitly explained the meaning behind that train of […]
Here are some peeks at the Hierophant. I posted two so that you can see a little more clearly my working process. The most drastic change between the first and the second is in the girl in the bottom right-hand site. Let me know what you think in the comments!
The Hierophant card represents the traditional, orthodox teachings of religion considered suitable for the masses. She is the ruling power of organized religion. jasonbeamstudios.com/site/g_thehierophant.asp (NSFW) I don’t think there’s an unhappier card in the Tarot deck than the Hierophant. There are more frightening and probably saddening cards to receive in a reading, the Tower and […]
I’ve always had a very superficial understanding of cards 2, 3, 4 and 5, in the tarot, otherwise known as the temporal rulers compised of the High Priestess (aka Papess), the Empress, the Emperor and the Hierophan (or Pope). Part of this confusion is that much of my early reading grouped cards one and two […]
The structure of Temperance comes about from a quirk of the formatting: it was going to be very difficult to make a chibi angel stand near the bottom of the card with one foot in the water and one foot out. Also, I dislike drawing feet. Really dislike drawing feet. So that’s the first major […]
I had a fan (I have a fan!) email me this morning enquiring about possible release dates for the Chibi Tarot, based on this thread from TarotForum.net: http://www.tarotforum.net/showthread.php?t=173408. I didn’t have a lot of good news, but at least I did have news, and I realized that perhaps a lot of you migh have similar […]
Thanks to the last minute notice from a new friend of mine, I was able to attend the Chibi Chibi Con this year. It’s without a doubt the closest con to my house, a scant few miles up the road to Evergreen State University. So last Saturday I packed up the family and we drove […]
I ordered some new Tarot books from Fields Book Store last week and they arrived yesterday! The first pair that I ordered was the Robin Wood tarot deck and book. I’m not sure how I’d never noticed the deck before, but I was really drawn to Wood’s style. Her evocation of the tarot is, first, […]
So go check him out: chibitarot.com/major-arcana/ix-the-hermit/
The Magician is a card with two distinct personalities. Before the early 20th century resurgence of interest in the occult the Magician existed humbly as Le Bateleur, which Wikipedia defines as ‘the Mountebank.’ A mountebank, for those of you less interested in 19th century jargon than I am, is simply a cheat. The Magician wasn’t […]
The Super Nintendo game Ogre Battle: March of the Black Queen was one of my first exposures to tarot. The game itself was incredibly fun, and though I was never able to finish the game (I’m WAY too much of a perfectionist to handle the seemingly random effects to my reputation that the game handed […]
Most of you who are interested in tarot and actively reading in the tarot community will probably already have heard about this film that’s being made. I can’t remember where I read about it, but I know that Mary Greer posted it on her blog recently, and reminded me of it. Today I donated to […]
The Fool was an exciting card to write about, but a difficult card to draw. The initial figure came easily enough: a cheery boy waving excitedly to a friend. He can’t see the danger coming, but we can. After that, though, it all fell apart. Should he have feet? None of the rest of them […]
I wish I could tell you how I got the idea, but I can’t. This project didn’t start out as a project, just as a few sketches that then took on a life of their own. There was something really unique to me about combining the ageless archetypes of the tarot with the incredibly specific […]