The Chibi Tarot Major Arcana is coming to a close, and I couldn’t be more excited. I’ve finished the Chariot and started work on the World Card. The last two remaining cards, the Star and the Sun, should be very straightforward, as I’ve already completed the major pieces for each of those cards. I’ve been […] 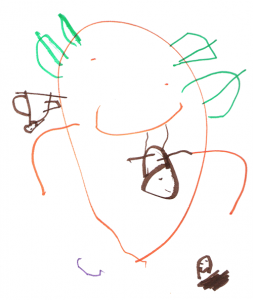 A few months ago my 4-year-old son took to the page and drew three of the tarot’s major arcana: the Sun, the Emperor and the Hanged Man. The results are below. Here’s what he had to say about the cards: Those are beautiful cards. Them mean the truth and prosperity. (You can see the originals […]
One of the interesting things about the Hanged Man for me are the coins that sometimes lay on the ground below him, fallen, we assume, from his pockets as he was hung. The meaning, of course, is that the hanged man has forsaken worldly wealth for an inner wealth of knowledge and deep spiritual insight. […]
It’s been two months since the Chibi Tarot Kickstarter was funded, but for me it’s still not entirely real. I don’t think that’s simply because the cards aren’t in my hand. There’s enough art and momentum at this point that the project is very real. I think that’s because I have a hard time taking […]
Chibi Nation! I know that some of you have already contributed to the Kickstarter campagin, and for that I am grateful. It may be that the rest of you are waiting to ride to the rescue as the Kickstarter ends, but I would urge you not to do that. I really want you to give […]
Before I dig into my review of the Emerald City Comicon I want to give you a little history. I grew up in San Diego. That won’t mean much to anyone who isn’t familiar with comic conventions, but if you are familiar with them you know that in the last 10 years the San Diego […]
Some sketches for the upcoming Hierophant card. Enjoy!
The Temperate angel is not one who shies away from passions or power, but who embraces it and who, most importantly, responds to every situation with the appropriate level of strength. Read More »
Originally I’d intended my next card after the High Priestess to be the Lovers. I really enjoy the layout of that card, and I plan on having it echo both the Hierophant and the Devil, as it does in the Waite-Smith, with the triangular staging of the three figures. But when it came right down […]
Hey All, Hope you’re having a great weekend. I’ve finished up The Fool today and will be posting it on Monday, so stay tuned. Until then, here’s a little sneak peek!