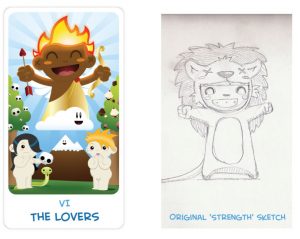 There’s nothing more irritating than starting over. Professional artists do it all the time. Dan Clowes has said that it’s better to redraw an entire page than to regret it when the piece comes out. I don’t like agreeing with him (he’s one of my least favorite visual storytellers), but in this case I’m forced to.

As I was moving into the detail stages of the tarot card 8, Strength, something kept bugging me about it. The pose and the posture irritated me. They were good, but they weren’t good enough. They were just generic. Then, going over the completed cards, I also realized that the little girl’s pose and facial expression were nearly identical to that of the angel in The Lovers. 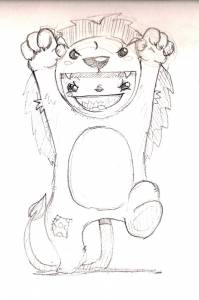 It’s tempting to say that the limitation of the facile “chibi” form is that I will end up repeating myself, because the form itself is so limiting. That’s twice a lie. I’ll end up repeating myself because it’s inevitable, not because of the form I choose. And the form itself is limitless, the only limitation is myself; if I allow myself to settle for repetition rather than pushing myself into new places, stretching my muscles so that I can be a little bit better than I was last time.

So, I started over. I didn’t want to. I wanted to be halfway done with the card, but although I like the original Strength, I really disliked how similar it was to the lovers. Instead, I imagined my daughter’s “monster” pose. We have a little Bowser toy at home, and whenever she wants to play with it (or really whenever she wants to tell us about monster, be it how her big brother is acting or the dinosaurs on her shirt) she holds her hands up next to her face and does a breathy growl. It’s adorable. So I drew her, in a lion suit, doing her monster growl. And it’s adorable too. 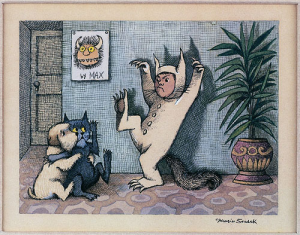 Looking at the sketch I’d done, it was clear that this version also had an earlier predecessor. Anyone familiar with Maurice Sendak’s body of work will recognize the spirit of Max from ‘Where the Wild Things Are’ in this second version of Strength. And I think that’s appropriate, both for its inspiration and for its meaning.