Special thanks to my friend and amazing photographer Rebecka Regan of ReganHousePhoto.com for the GREAT photos during the shoot. 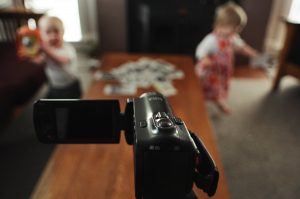 Hi there! It’s been awhile. How’ve you been? Me? Oh man, I’ve been busy. Let me tell you about it!

A lot of my time in the last few weeks has been spent prepping for the Kickstarter campaign. Actual work on the deck has fallen away as I’ve been preparing the way for a successful KS campaign, which is very difficult to do. Let me see if I can enumerate the ways.

The most important part of any Kickstarter campaign, from everything I’ve heard and read is to leverage my personal network, which in my case has been going pretty smoothly. Many of the folks in my network, are, unsurprisingly, either creatives, pagans or both which is great since that’s two of the three major spheres of influence that created the deck (the third being westernized Asian culture in the form of video games, anime and manga). So lots of folks have agreed to help me line things up for promoting the Kickstarter this Thursday. Two of my biggest wins came from leveraging my wife’s connections in the Pagan community. I know both Cara Shulz of the Pagan Newsire Collective and Andrew Bowen of Project Conversion through my wife. Both of them were kind enough to volunteer to interview me for the Kickstarter. 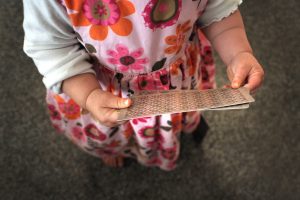 Beyond leveraging my personal and extended networks, I also did a lot of cold calling. This was, by far, the most difficult and least satisfying part of the job, and it may turn out to be the least effective as well, but we’ll have to wait and see. I put together a list of 37 blogs that I read and blogs that are similar to blogs I read and blogs that seemed like they would be interested in what I was doing. I cold emailed every single one. I sent a brief description of the project, the Kickstarter and a quick project summary/press release that I’d put together the week before. Of those 37, four responded. That’s roughly one in ten. Ouch. Pretty tough stuff. I had to work hard to find the blogs, work really hard to send out the information to those who might only have been fringe related, and I had to battle a LOT of futility. Still, it was an amazing feeling to be accepted by those four blogs whom I’d never spoken to before, and it felt like pretty deep validation of what I’m doing that complete strangers would be even remotely interested in helping a nobody like me succeed. So thanks to Supahcute.com, The Uniblog (their real site is down for the moment, so I’m linking to their Facebook page instead), ForcesOfGeek.com and DesignYouTrust.com for helping this thing happen.

After having burned myself out on the publicity aspect of it I turned to creation. The last week has been spent leveraging my paltry movie making experience by combining my knowledge of writing Adobe Flash, a bottom-of-the-line digital video camera and tripod from Best Buy, my ever-patient-family’s awesome acting and iMovie into making the masterpiece that will help the Chibi Tarot go viral and raise hundreds of thousands of dollars! I had originally intended to do a simple talking head bit with an earnest explanation of what I was doing and why, but a good friend of mine (who’d already successfully completed his own Kickstarter encouraged me to do something a little more inventive. I don’t know if I’d classify ‘infomercial parody’ as inventive, but it is a lot more fun to watch than my (admittedly handsome) mug. So, I wrote the script, studied the Snuggie infomercial WAY more than I expected to (it’s a note-perfect infomercial in my mind, right down to the zooming in or out on EVERYTHING), and cobbled something together. I really didn’t work in any kind of pure fashion. I wrote a bit, filmed a bit, did some graphics, put a rough together to see how it fit, then went back to the script. It was a mishmash of a working process, but that’s the huge benefit of working on my own. The drawback is that everything takes FOREVER, since I’m the only one working on it. What I learned from the process was that having a well written, tightly woven script is INTEGRAL to making a good movie. The revision process is crucial to making a good script, and with that as a roadmap making a good movie is infinitely easier. 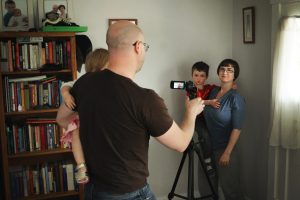 As of this writing on Friday night I haven’t shot any of the final live footage. I did some test shots with the family the day after I brought the camera home (had to charge the battery!), and though the shots were useable in a pinch there is a lot that I’m hoping to improve on tomorrow (keeping my wife’s head in the frame for instance), but I am NOT looking forward to shooting with two children. Getting kids to do things that they don’t want to do (and my son is notoriously tempestuous, going from excited to melancholy at the drop of a hat) is nearly impossible. I’m hoping to play the two kids off of one another, but that has at least as much potential, if not more, to backfire as it does to succeed.

A few bullet point takeaways on filmmaking from the last week

There’s still a lot to do. I still need to put together my funding levels. I’ve sketched them out roughly, butI haven’t done them precisely. I still need to launch the actual project on Kickstarter. Then I will put together the media packets for everyone who’s agreed to help me promote the project, and then there’s a month of flogging everyone I know within an inch of their lives to help me get the word out, which will be very difficult, but, in the end, worth it. Whether or not this Kickstarter is successful it’s been SO educational and satisfying to put together this publicity, these graphics and this film. It really reminds me of how effective I can be and how capable I am when I put my mind to something, and that, in itself, is incredibly satisfying.

So, here’s to next week and beyond!