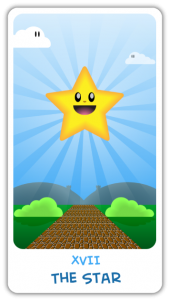 You’ll not be surprised that I am a fan of contemporary illustrated tarots decks, though you might be surprised by how many of them there are. There has been a strong current of contemporary illustrators taking on the challenge of illustrating tarot cards in the last few years and the results are, for the most part, stunning, the variety of interpretations brings a wonderful, modern vibrancy to the tarot, always a reminder that it is a useful tool even outside the realm of diviniation. While not all of these decks are easy or useful to read with the sheer imagination that many of the artists bring to a single illustration is worth checking them out. Often the ability to draw a single card instead of an entire deck can produce beautiful results. 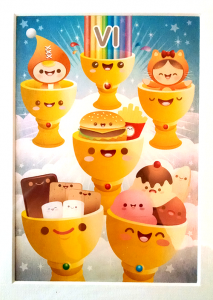 6 of Cups by Jerrod Maruyama

This is probably the first contemporary illustrated tarot I ever saw. While I was already working on the Chibi Tarot the existence and expansion of a modern illustrated tarot really heartened me. The cards themselves are from a mind-bending variety of styles. The sheer ecclectism of the deck makes it a wonderful artifact, but I can’t imagine reading with it. The Super Punch tarot was produced for an art show at the Bear and Bird gallery in Florida, but was never produced as an actual deck since the variety of sizes and styles made that nearly impossible. I actually own one of the pieces that was in the show, Jerrod Maruyama’s 6 of Cups, for what I hope are obvious reasons. 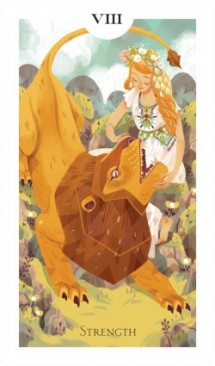 The Light Grey Tarot was “[c]urated by Light Grey Art Lab as a part of the Tarot, Mystics and Occult Exhibition.” This deck brings together a group of 78 artists to reinterperet the tarot in a much more cohesive fashion than the Super Punch tarot did. While the styles still vary wildly, there seems to be more focus on the conjuration of the occult. Where the Super Punch illustrators seemed to bring tarot ideas into the realm of pop culture (the King of Cups, for example), the illustrators in the Light Grey Tarot seemed much more focused on bringing a powerful syncretic and mystical energy into the deck. So while the the illustrations feel fresh and lively, the connection to the tarot’s rich history of symbolism and illustration shines through here.

It was produced as an actual deck with a booklet and is one that I own and have read with. It is not the most resonant deck for me, as not all the illustrations seem to be focused on the symbolism of the cards (the six of swords is particularly mute for me), but so many of the illustrations are so evocative that reading with it can be a real pleasure, and the deck is still for sale. 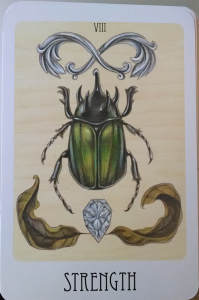 An oversized majors only deck funded on Kickstarter, the Wooden Tarot is the work of Andy Swartz, who’s style “is typified by dream-like, faintly creepy and macabre fantasy wildlife.” The deck is a work of art on every level, beautifully designed, illustrated and executed. The wooden part of the tarot stems from her canvasses: 6×8″ wooden panels painted on with a mixed media of acrylic paints and colored pencils.The illustrations are simultaneously delicate and lush, capturing the rich color of animals, plants and minerals she depicts with lovely accuracy while simultaneously conveying the mystical allure of the shadows flickering just beyond the edge of the firelight.

The Wooden Tarot major arcana is completely sold out, but Andy completed another Kickstarter in March of this year and is currently producing a full 78 card deck, which you can preorder here. The Minor Arcana carries over both the beauty and the sparse style of her artwork, while adding and interesting new organic layer to the deck by renaming the suits Bones, Plumes, Stones and Blooms.

There’s no question that traditional tarot decks carry with them a boatload of white male privilege. For starters, there’s the court that reinforces medieval gender roles and power disparities. Then there’s the decks themselves: despite being illustrated by powerfully talented women, Pamela “Pixie” Smith and Lady Frieda Harris, the two most influential tarot decks of the last 100 years are both more familiar to the public by the names of their male “creators”: The Rider Waite deck and Crowley’s Thoth Tarot. The Collective Tarot addresses much of this cis-gendered white male privilege through their radical revisioning of the tarot. Describing itself as “a collaboratively created, radically-politicked, queerly-revisioned Tarot deck” the Collective Tarot is an extreme departure from the traditional western occult symbols embodied in the tarot to the point that it becomes nearly unrecognizable, which may well be the point.

The pieces themselves are intense and raw. There is an unfinished quality to the art, an intentional crudeness reminiscent of punk show flyers and ‘zine covers. The aesthetic reinvigorates the art in a modern, urban way queering the traditional occult symbolism in ways that I often find offensive, which I think is the point: taking the sacred and profaning it, not simply for the sake of profaning it but to stretch it in ways that it certainly never envisioned for itself in order to include those it never attempted to envision. In doing so the Collective Tarot has created something less like a tarot deck and more like its own unique oracle. While it adheres to the traditional structure of five suits with 78 cards with many cards that overlap with traditional tarot trumps I find it more fruitful to approach this deck from a completely fresh perspective rather than attempting to find similarities between what I’ve known and what they’ve created. 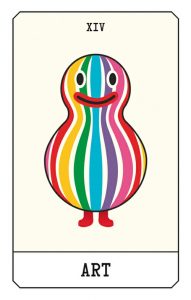 Without question the Pictarot is the least occult of the decks listed here. Created and published by PictoPlasma, a German/New York based organization focused on the development and promotion of character design, that’s exactly what this deck promotes: characters. While there is carry over and dialogue between the characters and the ideas that they represent the focus here is clearly on the development of the character at the expense of the idea. None of the cards have any background or environment to support or complicate them, the figures are the complete focus of attention. Still, the characters are inventive, creative and entertaining and character design is a big part of why I love the tarot, so I am personally enchanted by this deck, which you can still buy online.

As an added bonus, if you’re not ready to commit to the deck without seeing all the cards (and you have an iOS device) you can check out the entire deck through the Pictarot app. Heavy on the theatre, and without much flexibility about how you use the cards (they have a one, two, four and seven card spreads) the app is just $.99 at the app store and can be an amusing way to pass 30 minutes without actually breaking out your cards. 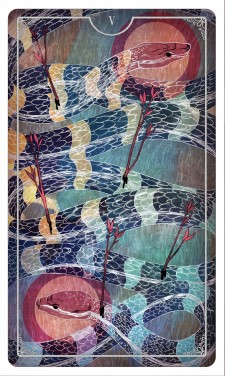 The 5 of Wands by Julia Iredale

The Ostara Tarot is the most recent member of this group. I recently stumbled across is on the reddit pagan forum. The product of four artists working together, the results thus far vary stylistically, but are united by a desire to explore the spirituality and the mysticism of the cards themselves and the deck as a whole. The deck is strongly nature based, but speaks to the human intersections with nature, especially the power of making and artifacts, drawing out the intricacy and beauty of the crafted object and the way that it can interact with the natural world, as well as the way the natural world is transformed into artifacts as a raw material for human expression.

The level of mysticism ranges a spectrum across the artists’ styles, from the psychedelic dreamscapes of Julia Iredale whose smoky-colored branch-pierced snakes echo strains of a voodoo saint Sebastian, to Molly Applejohn whose adorably anthropomorphic animals are deeply reminiscent of Brian Jacques’ Redwall and David Peterson’s MouseGuard.

As of this writing there are 20 cards available. I’ll be following up this post with an interview with artist Molly Applejohn who will hopefully provide more detail about the plans for the deck and whether they’d on publishing or not.

What are some of your favorite contemporary decks? Did I leave any off the list?