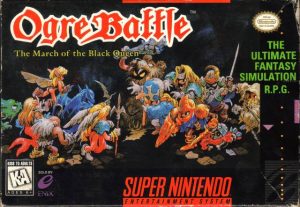 The Super Nintendo game Ogre Battle: March of the Black Queen was one of my first exposures to tarot. The game itself was incredibly fun, and though I was never able to finish the game (I’m WAY too much of a perfectionist to handle the seemingly random effects to my reputation that the game handed out for liberating towns and cities) it remains one of my favorite games and one of the most fondly remembered, along with other seminal fantasy games like Secret of Mana. Part of the reason, I think, for my fondness towards Ogre Battle is its art, both the in game art and the instruction manual art that hinted at a deeper world that lay unrevealed to the public eye. Even in all its 16 bit glory, the art captured for me the uniquely Japanese blend of European high fantasy and Asian artistic influence. While comics like Asterix certainly tread the same ground, they do it with a more classically Western style that doesn’t capture the strange spectrum of cute, fierce and sexy that has come to be the hallmark of Japanese pop art. 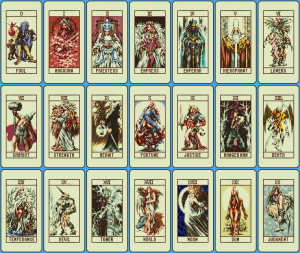 The cards themselves had very little to do with Tarot as I would later come to understand it, and in many ways furthered the stereotypes of the cards that earnest students and readers do much to dispell, but there was something unmistakably magical and appealing about them in a way that has had a lasting impression on me. The cards play dual roles within the world of the game. To begin the player draws 6 cards to determine the statistics of their main character within the game. Then, each time that a town or city is liberated within the game, the player chooses whether or not to draw a card. Each card drawn has an effect on the in game play, either on the group of soldiers that drew the card, or on the players reputation as a whole. Fool is lucky, Devil is evil, etc, etc. The cards, once drawn, can then be used in battle against enemies, essentially as magical hand grenades to be set off with various results against opponents: instant death, enemy retreat, powerful bolts of energy and the like.

There was something exciting about this that I never thought much about until now, and maybe something metaphorical about it. The things that the tarot tells us, the information that we receive through the cards can then be used to our advantage later down the road. Perhaps not in such with blindingly mystical maneuvers as calling down instantaneous death upon our enemies, but perhaps in a moment of recognition being able to call out the unhealthy behavior of ourselves or others in a way that stops it in its tracks. It is a stretch, I realize, but I hadn’t considered the metaphorical value of keeping the cards in our pockets until now. Tarot has in many ways been a passive act for me, one in which I am the receptacle for the information that I can receive, or if I am lucky, worry from the images and their juxtapositions within contexts. I hadn’t thought of the tarot as a tool I might use on a daily basis, in battle with myself or others.

Both I and the world have moved on from the 16 bit platform, but I’ve never forgotten Ogre Battle. I’ve gone back to it a number of times, using my computer as an emulator to relive the magic, and the game doesn’t disappoint. The magic is still there in the game play as well as in the character design, including the cards. I’ve searched on and off for an Ogre Battle art book, and though art of video game books are often produced, I’ve never been able to find one for Ogre Battle, much to my disappointment. However, in one of my recent searches I discovered that a promotional tarot deck had been created for a later game in the series, Tactics Ogre: Let Us Cling Together. As soon as I could I ordered a copy on eBay and it arrived this week. 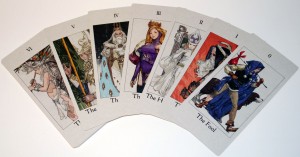 It was probably impossible for any real deck to really capture the magic that I felt using the deck in the game. Video games create their own worlds, and trying to recapture what happens in their world outside of their world never works. So I admit that I am a bit disappointed with the cards that showed up. The deck is only 22 cards, covering just the major arcana that is used in the both the original game and the current iteration. The cards only maintain a rough fidelity to the cards in the original, but uses the exact images from the current game. That they don’t match exactly to the originals is what I was the most disappointed by.

The art itself is crisp and detailed, the colors strong, but muted. The illustrations are by renowned Japanese artist and designer Akihiko Yoshida, who worked on the original Ogre Battle as well as illustrating Let Us Cling Together. His style throughout the game is detailed and highly refined, though typical of the Asian vision of the magical middle ages: the women are as sexy as they are deadly, and the men surefooted as they are strong. His work on the cards is, for the most part, true to the Rider Waite vision of the tarot, with some deviations, the Chariot being the most notable. 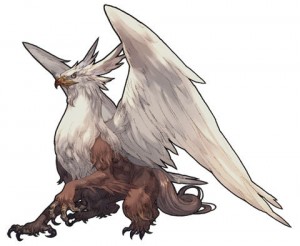 From an intuitive perspective, it is not a deck that lends itself to reading, which for me is fine, since I hadn’t planned on reading with it, but rather framing it and putting it on my wall. The illustrations are, from my perspective as a reader and interpreter, too generic to draw much from. There is little alchemical or esoteric detail and the characters themselves are fairly neutral in their poses, leaving much to be desired from an occult point of view. No tarot deck is easy to make, and it’s clear that Yoshida did his homework in interpreting and reinterpreting these images, but it still feels, after looking through them a number of times, that something is lacking, some key ingredient is missing for them to be useful cards. Many of the illustrations don’t feel as finished or as active as many of the concept art illustrations, which is disappointing. I know from experience that I’m a picky reader and art critic, so take my opinion with a grain of salt, but ultimately this feels more like a vanity deck than a real tool in my tarot arsenal.