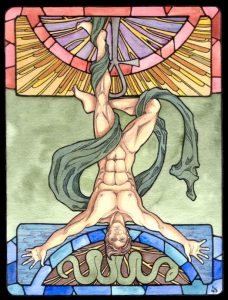 One of the interesting things about the Hanged Man for me are the coins that sometimes lay on the ground below him, fallen, we assume, from his pockets as he was hung. The meaning, of course, is that the hanged man has forsaken worldly wealth for an inner wealth of knowledge and deep spiritual insight. The coins, to the hanged man, no longer hold any value, but perhaps for the pieces of metal they truly are. I, for one, don’t know that I’ll ever achieve the level of spiritual enlightenment to see only metal and paper when currency is placed before me, and, truth be told, there’s something a bit sanctimonious about this idea to me: that truly spiritual people no longer value money. It’s especially irksome since change in the world is difficult to accomplish without tools, one of which, and a deeply powerful one at that, is money.

My own traditional interpretation of the hanged man and his coins has always been that he lost them upon inversion; that the hanged man symbolizes the process of losing the coins as they bounce painfully down into his face and chin, then struggling fruitlessly against our bonds for the return of the comfort of our material things and eventually, perhaps even after exhaustion, finding peace and perhaps enlightenment. The focus in that interpretation is coming to terms with a difficult and uncomfortable situation where things are out of our control, which I think is valid, but may be missing another way of looking at it. What if, instead of the Italian ‘Il Traditore’, the traitor, who’s been strung up against his will, we see a holy man who chose first to empty his pockets and then climbed onto the tree? The shift is subtle, but important, the crux of it being that the hanged man couldn’t be hung until he emptied his pockets; that the choice to let go of something that is holding us back or down, be it material wealth or even a dysfunctional emotional or spiritual relationship is a prerequisite for enlightenment (heavy on the lighten). That the tree isn’t the difficult situation, it’s the reward. Being weighed down, illustrated in the moment before the Hanged Man takes place, a moment forever invisible to us, is truly the difficulty, and that inversion is the reward, one we can’t achieve until we intentionally lighten our load. 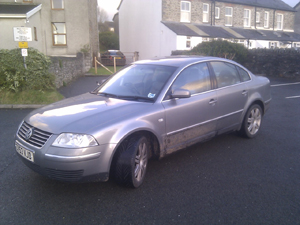 About this time last year, as my wife and I were preparing to leave Wales, I was in an odd position of needing to sell a car with a very hard deadline. I’d only had the car a few months, and buying it had been difficult, selling it was going to be even more so, as we lived in a rural area with a limited market for mid-priced cars. For weeks before we were going to leave I agonized over what I was going to do with the car. I posted ads on eBay and around town, put the word out on the Welsh internet (word of mouth), but nothing came of it. As our deadline neared I grew more and more upset as I tried to figure out a way I could find a buyer for this car and at least salvage a bit of my investment if not break even. Then one day, out of the blue, I realized I didn’t have to sell it, I could just give it away, and whoosh, the pressure and intensity lifted and I was free and the world was a bigger place again.

It still wasn’t easy. It turns out that five cylinder sedans are somewhat unpopular in the rural UK: they use too much gas and don’t have four wheel drive. So the first two people that I asked turned me down. I wanted to give them a £3,000 car and they wouldn’t take it. Finally, a friend of my wife’s who’d been looking for a car agreed to take it. Her husband met us at our hotel near the airport, along with the proper documentation to sign over ownership and the night before we left the UK he drove away with my car. I was sad to see it go; it had been the first car I’d ever bought and I loved driving it, and I did miss it. But letting go of it was the best choice: it allowed me to move forward, to fly away the next day and continue my journey. Holding on to it, clinging to the cash it might have generated, would have been much more exhausting, and choosing to let go was definitely the right thing to do.

What are you holding on to that you can let go of? What have you let go of that allowed you to be “en-lighten-ed”?

2 Responses to “The Hanged Man and the Material World: Or the Time I Gave Away a Car”