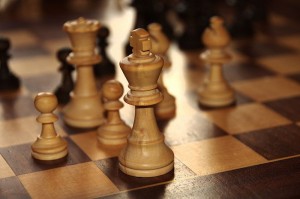 I’ve played chess as long as I can remember. Not well, mind you. I thought I played well until my friend Ethan beat me in roughly 7 moves when we started playing in Mrs. Hoffman’s 4th grade class. My father taught me the rules early, over a variety of chess boards, though the one I most strongly remember was a heavy stone chess board with dark and light marbled squares and heavy, crudely carved pieces. The knight in particular stand out in my mind, a certain rough primitiveness that was echoed in the weight of the pieces and the board, that even then appealed to me. Tarot, for all its beauty, lacks a certain visceral quality that a nicely weighted chess piece can convey, especially in the act of capturing a queen.

This week I took chess up again and was once again struck by some of the similarities between the ancient game and tarot. Both, for instance, are very old. Chess dates back to roughly the 6th century, beginning in India, spreading to Persia and the Arab world and then into southern Europe. Tarot began roughly 800 years later in Italy and spread throughout Europe and there’s no doubt in my mind that chess influenced the tarot, given its popularity in Europe at the time of the development of the tarot. According to Wikipedia, “The popularity of chess in the Western courtly society peaked between the 12th and the 15th centuries,” the exact moment that the tarot is being created and disseminated on the continent. Both tarot and chess share a fascination with the structures of worldly power. While the tarot transcends that to go beyond temporal power, chess hints at it too, as we’ll see later.

Personally, chess gave me one of my earliest insights into the tarot, and that’s a realignment of the High Priestess. Most if not all of the tarot literature that I’ve read regarding tarot always compares and contrasts the Magician and the High Priestess. It’s an understandable comparison, and a valid one, but not the only one. The female High Priestess forms the primary triumverate with the male Magician and the asexual or hermaphroditic Fool. Numerically they symbolize the fundamental process of creation: existence, creation, reflection.

Squares are less sexy…unless you’re a chess player in which case they’re the foundation of the world; a whole little universe packed into the nearly infinite possibilities of 64 squares. The High Priestess doesn’t just belong to the triangle club, she also belongs to the square club, a grouping that I didn’t see until I starte comparing the Major Arcana to the chess board. The correlations that jumped out at me immediately were the Empress and the Emperor who clearly represent the king and queen. After that I saw that the High Priestess and Hierophant are both religious figures, as are the bishops on the chess board. Thus you can see the four temporal rulers in the tarot as a the fundamental unit of the back row of a chess game.

Contented with that insight I never took the idea further, expanding the chess metaphor into the first 16 cards of the Major Arcana. This morning I did, and we’ll explore that more in Part II. For now, do you buy my chess/tarot comparison? What are some surprising tarot correlations you’ve developed in your own practice?