I’ve always had a very superficial understanding of cards 2, 3, 4 and 5, in the tarot, otherwise known as the temporal rulers compised of the High Priestess (aka Papess), the Empress, the Emperor and the Hierophan (or Pope). Part of this confusion is that much of my early reading grouped cards one and two together as a pair, comparing and contrasting the outward physical power of the Magus to the inward spiritual power of the High Priestess. After a lot of reading I find this comparison less and less fruitful, not only because I don’t buy into the Magician as a powerful card (in the triumphal tradition he’s actually the most powerless card in the deck), but also because the High Priestess so clearly belongs to the quartet on her other side.

The first time I envisioned cards 2 through 5 as a quartet it was as a chess analogy. I saw the Empress and Emperor as Queen and King and the Pope and Papess as bishops on either side of them, whispering into their ears as advisors. This vision came with such clarity it was very difficult to ignore. Since then I’ve been grappling with how to make sense of them, both on an individual level, but also as a group. The emperor I understand fairly well. The card I’ve drawn gives symbolic understanding of him, even if I haven’t taken the time to write about him yet. He’s a square, and he has to be. He needs to be dependable, because there are people depending on him. He can’t take the kinds of risks that the Magician can because if the Emperor fails, the whole kingdom fails. But my understanding of his 3 companions, and more specifically how they function as a unit was lacking.

As I was beginning my sketches of the Hierophant, a card that I’m looking forward to writing about later this week, I needed to understand his character and what he represented. I don’t want to go into too much detail here or I’ll spoil my post for Friday, but I needed something beyond the idea that the Pope was the pope, symbolic of St. Peter, the crossed keys and our gateway to the divine. The High Priestess is already our tunnel to the divine. The pope holds the key that fits the High Priestess keyhole. What makes him different from the High Priestess? Why do we need a Pope and a Papess? 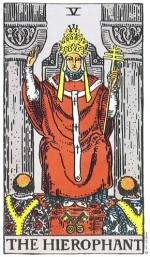 My own personal key in unlocking an integral facet of the Pope was his visual structure. The Pope and Hierophant, like the Devil, the Chariot, the Lovers and so many other cards in the Waite Smith tradition, features the triangular structure of a central powerful figure and two attending figures below them. In the case of the Devil these figures are trapped by their own misunderstanding of power. In the Chariot the grumpy sphinxes (I can not WAIT to draw grumpy sphinxes! So cute!) are harnessed to pull the chariot along. In the Lovers, Adam and Eve wait beneath a flaming angel. In the Hierophant these two figures are parishioners, they’re his audience, they’re his adoring public, the choir that he preaches to. In the same way that the Emperor can’t take chances because people are depending on him, so too is the Pope depended on, in a way that the High Priestess is not. The Pope and Hierophant, in other words, are the public face of the church, the public master of a spiritual community. Realizing this, comparing it immediately to the Emperor, who is the public master of a physical community, then reflecting those values in the feminine or interior powers, suddenly the four cards as a quartet became very clear to me.

Each of the cards in the Temporal Rulers quartet symbolizes a binary variance of two values: Private-public and spiritual-physical. That’s a complicated way of saying they represent one of four possible options. The High Priestess or Papess is the first, representing our Private Spiritual world. The Empress is next representing our Private Physical world. The Emperor follows standing for our Public Physical world, and the Pope or Hierophant ends the quartet as the face of our Public Spiritual world.

One of the things that this illuminated for me was the Empress’s pregnancy. I’d never really understood what the Empress signified beyond the generic “She’s in touch with the earth, she likes to be outdoors, and she’s fertile,” which, as you might imagine, rang incredibly hollow. Nor did it explain why she was pregnant. Being pregnant, in and of itself, has no real direct link to the earth. It forces us to fall back on the idea of fertility, which I don’t think is necessarily incorrect, but never really felt like it got to the heart of the Empress for me. Now, though this lens, the Empress comes into crystal clear focus: she is about the shaping of our own physical world. The garden that she keeps is the one that she has complete control over, one whose shape and direction are a direct reflection of her desire, her will, her inner vision. Thus, her pregnancy is not a literal pregnancy, but the symbol of her ability to bring forth into the physical world the shape of her desires based simply on her will. It is not itself a symbol of fertility, but like the High Priestess, a symbol of passage: what begins as an idea germinates magically inside of her, gestates and then is made into a physical reality.

This isn’t the only way to interpret these cards, it’s not their only valence; each of them stands on their own with their own meanings, but I think their function as a group can be incredibly insightful to an otherwise neglected aspect of their meaning.