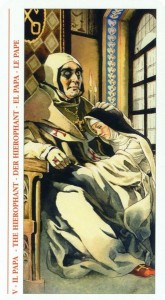 The Hierophant card represents the traditional, orthodox teachings of religion considered suitable for the masses. She is the ruling power of organized religion.
jasonbeamstudios.com/site/g_thehierophant.asp (NSFW)

I don’t think there’s an unhappier card in the Tarot deck than the Hierophant. There are more frightening and probably saddening cards to receive in a reading, the Tower and Death both come immediately to mind, but these card themselves aren’t sad in the way that the Hierophant is. No, the Hierophant is sad because he’s probably the most neglected and maligned card in the deck. It’s not his fault, but he bears the brunt of the misunderstanding that surrounds him.

The quotation above, which I ran across while looking for images of the Hierophant for my previous post (Honestly, I don’t know what tarot designers did before the internet!). It was the perfect quote for the Hierophant because it quickly and efficiently summed up everything I think is wrong with the popular interpretation of the Tarot’s fifth card. This traditional interpretation, that the Hierophant (who we all know is just the Pope in disguise!) stands for organized religion (which we all know means the Christian church, and mostly the horrible Catholic church!) misses the point of both the Hierophant and the Pope entirely, and I think that’s a huge part of the reason that most people using the tarot cards find the Hierophant so distasteful and unappealing.

The Hierophant isn’t about the Church, he’s about all churches, temples, mosques, and cults. He’s about any type of organized religion, including, I would argue, paganism. He’s the external, public face of any group of believers that can, at least, agree they’re believers and come to some basic agreement about what they believe. Oftentimes these groups have a leader, a first among equals, who leads the rituals and helps to reinforce the system of belief that the group has agreed upon. This, then, is the Hierophant. Not (just) a dowdy, rule-enforcing Pope, but any leader of belief who brings his or her believers together.

Waite understood this, though he expressed it as obscurely as he does almost everything, and said as much: “He is the ruling power of external religion, as the High Priestess is the prevailing genius of the esoteric, withdrawn power….the Hierophant is the power of the keys, exoteric orthodox doctrine, and the outer side of the life which leads to the doctrine…” The Hierophant is about creating communion with his family, with the body of believers. Whatever path you choose, whatever flavor of the divine you prefer, whether it’s vanilla Christianity or some spicy obscure esotericism, the hierophant is about helping to bring you into the circle of that which is holy.

All spiritual groups need someone to do that for them, this is who and what the Hierophant represents, the exterior public performance of the rites, whether that’s taking communion or worshipping the Star Goddess. Which leads me to the most important part of the Hierophant, and the part I’m trying to revive, is that the Hierophant is about celebration! The public embracing of what we believe, the power of communal celebration with God and each other. The joy of being with people we love and sharing the things we believe, of indulging ourselves in the ecstatic communion with the divine. Look, most Methodists aren’t going to go that far with their pastor (even if most of them could use a good dose of the ecstatic), but those aren’t the things they’re looking for from their Hierophant. Judge them for that if you will, but don’t take down card number five with them! If you do, you’re losing out on a powerful figure whose expertise at channeling the power of God into the power of the group is one that we can all benefit from.