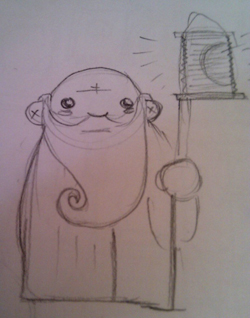 Originally I’d intended my next card after the High Priestess to be the Lovers. I really enjoy the layout of that card, and I plan on having it echo both the Hierophant and the Devil, as it does in the Waite-Smith, with the triangular staging of the three figures. But when it came right down to it the Lovers just wasn’t working for me artistically. I want to shift the flame-haired angel into a boy in a dragon suit, a la the boy in a goat suit in the Devil, but that didn’t feel authentic to the card.

So I left off. I drew some lions and some little girls, but Strength wasn’t speaking to me either. Then I started drawing some old men. The first one I drew was fairly typical, a long white beard with a curl at the end, a kindly old man not terribly different from a bare-headed Santa carrying a Japanese paper lantern. I considered the drawing for a moment, and realized that the hermit I wanted to draw wouldn’t have such a well-manicured beard. He is scruffy looking man who wanders the wilderness dependent only on himself and the generosity of nature, seeking knowledge of himself and the universe. This is a man for whom appearance is almost completely meaningless, a man who has abandoned his exterior reflection for the privilege of inner reflection; he has given up the razor and the comb for the candle and the cane. 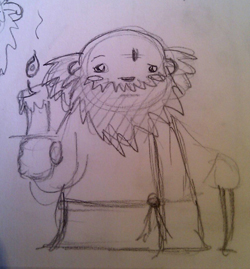 So I whipped up a few versions of a bald old man with a scruffy beard and was immediately enamored with him. His kindly eyes and gentle expression showed an understanding of human suffering because he had suffered much, and through that understanding a compassion for those of us who suffer without the intimate self-knowledge that the Hermit has acquired through abandonment of civilization and companionship. This, for me, is the dichotomy, the contradiction that defines and crystalizes the Hermit: he sees clearly the roots of human suffering, understanding it completely through his intimacy with his own suffering, but simultaneously wants no part of it. It is a powerful paradox that lies at the heart of the Hermit and one that I personally feel on a daily basis as I sort through my Facebook page. To listen to much of the drama and strife that bombards us in our daily lives, and to know that much of it is our own doing, whether to distract us from the things we may be afraid of (failure, success, disappointment, joy), to give meaning to an otherwise seemingly meaningless existence, or sometimes because life is just hard. I both understand what many of my friends are going through, and simultaneously want no part of it for myself.

Once the initial sketches were finished I picked up my laptop and googled ‘Japanese hermits’ and discovered the previously unknown to me world of the Yamabushi, an ancient sect “of mountain hermits, ascetics, and “holy men”, who followed the path of shugendō, a search for spiritual, mystical, or supernatural powers gained through asceticism”. I was immediately taken with their mythology, and felt and my own longing to walk away from my comfortable life, and live alone in the wilderness, seeking only enlightenment as my goal. I love the fantasy of the hermit, and the inclusion of martial arts and supernatural powers to the mixture made it incredibly intoxicating for me. There is a romantic part of me that yearns for this kind of commitment to the metaphysical, that wishes I had a calling strong enough to throw away the trappings of this world and walk the world seeking consistent communion with God through the world.

It is an unrealistic goal, certainly, but I think my motive, at least, is pure. I do yearn for a break from the distractions of the day to day world that I might focus more fully on…It. I’m not sure what It is, but I know that articulating It is the first step in finding It. And yet, I, more than most of the people I know, have time enough to spare in order to focus on It, and I don’t, at least not in the severe ascetic way that the ancient Yamabushi do. What this brings me back to is that I love life. It is easy for the critic in me to cast this love of my life as a fear of the ultimate commitment to myself and my journey, metaphysical or otherwise, and I freely admit there is a certain degree of fear in my not embracing things, but I also really love my house, its warmth, my family, near and far, good food, good wine, great comedy, art in all forms, Google, Wikipedia, and on and on. I don’t want to give those things up. And ultimately, I don’t think I have to.

I’m not cut out for the Hermit’s life, but, and I think this may be the lesson of the card, for me today at least, if not for all time, if I can incorporate just a bit of the hermit’s mindset in my daily life, if I can carve out 30 minutes of hermitage daily it will help me in my own journey towards It, towards whatever metaphysical realization is possible within my comfortable life. 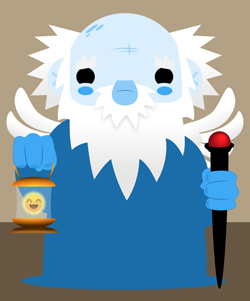 Lastly, the imagery that came with the discovery of the yamabushi, specifically the masks and sculpture of the yamabushi tengu and its associated karasu tengu, was mega-inspiring. The colors, shapes and stories touched something childlike and exuberant in me. These fierce old men with wings and long noses were like nothing I’d ever seen before. Their bird-faced sword-wielding companions carried a dignity and grace that I admired. They created a heady brew of excitement and wanting-ness in way I experience when I’m looking at my favorite vinyl toys. I think that reflects the really contemporary aspect of these images; they feel very accessible to me, very relevant in a world full of imaginative creatures come to life on screen and in plastic.

All of these things came together in a really natural way, the mythology and the imagery fit so neatly together in a way that steps out from the traditional Western Hermetic Hermit and opens the door to a wonderfully fresh feeling of energy and excitement. The Hermit isn’t done yet, but it’s really refreshing to be able to take something from the bland place where I started and infuse it with layer after layer of intriguing stories and imagery from thousands of years ago and thousands of miles away.